Bad news for Samuel Eto'o who's been dropped by his team Antalyaspor following a provocative post on Instagram.

In Turkish alongside a screenshot of his playing record, Eto’o wrote: ‘Reminder – perhaps some people do not feel respect for me because I am black. 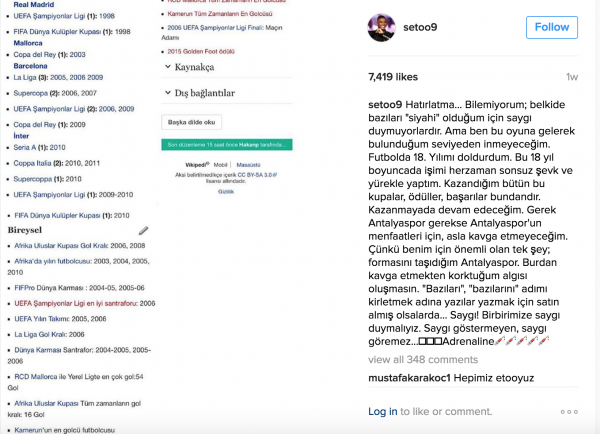 Eto’o has been linked with a move to Turkish rivals Besiktas in recent weeks which triggered a backlash from fans and pundits.

A subsequent message from Eto’o clarified that the message was not directed at Antalyaspor chairman Ali Safak Ozturk, but the striker has now been informed he has been omitted from all future squads until the matter is resolved.

"Ozturk is quoted in the Turkish media as saying: ‘No player is above the interests of Antalyaspor. Everyone must know their place."

Radiohead mystery: the band disappeared from the web

FEDEZ, A MUSICAL PROJECT ALONG WITH HIS BUSINESS PARTNER J-AX?

Brand new on the eFanswer platform, Fedez arrives with news: the making of a new album, which is also being talked about in his social media profiles. However there still aren't any previews, only a mirage: what if the rapper's new project saw the participation of J-Ax? Some time ago Fedez received his second golden Tapiro from "Striscia la Notizia" and he told Valerio Staffelli: "I'm working on a new CD but for now I won't tell you with who." Interesting, given that Fedez recently published a picture next to the Italian hip-hop "uncle" with the image of a missile shot upwards and there are also rumors that say that they would both be the next judges of Amici by Maria De Filippi.

Good result for the Majorcan in the United States

The world of tennis is devastated these days by the clamorous news: on March 7th Maria Sharapova, 28, ex number 1 of the WTA ranking, announced that her doping tests resulted positive during the last Australian Opens.

Danilo Gallinari on the pre-olympic tournament "Fans will be crucial"

Less than a month the tournament that could give the "Azzurri" the direct access to the Olympic games in Rio. Il Gallo also aims to get all the support he can from the fans.