Freddy Mercury would be 70 today - Asteroid named after the singer

Freddy Mercury 70th b-day: Asteroid named after him by Brian May

Queen guitarist Brian May says an asteroid in Jupiter's orbit has been named after the band's late frontman Freddie Mercury on what would have been his 70th birthday.

May says the International Astronomical Union's Minor Planet Centre has designated an asteroid discovered in 1991, the year of Mercury's death, as "Asteroid 17473 Freddiemercury."

May, who has a doctorate in astrophysics from Imperial College, London, says the newly named asteroid is "just a dot of light, but it's a very special dot of light" and recognizes Mercury's musical and performing talents.

Mercury, born Sept. 5, 1946, wrote and performed hits including "Bohemian Rhapsody" and "We Are The Champions" with Queen, releasing over a dozen studio albums between 1973 and 1991. 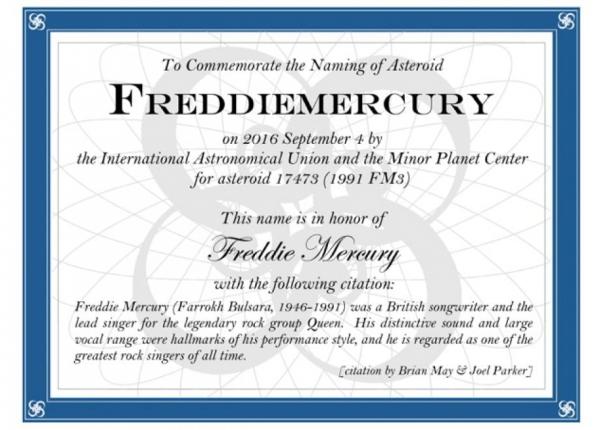 Andrea Iannone welcomes Jorge Lorenzo to Ducati: "We are going to be a perfect team"

The Italian pilot emphasized that "Ducati did well in hiring the Majorcan. He can conquer the MotoGP title"

The 2017 season will mark the beginning of a new adventure for Jorge. The Spanish, starting next season, will in fact race with the Italian team.

No domination, lots of pretactics. It is what emerges from the results of the MotoGP tests on Phillip Island, held last week in the Australian circuit. Jorge Lorenzo scored 9th, caring more about understanding the frame and tires (Michelin) of his Yamaha than about getting the best performance. The third session, on Friday 19th, was dominated by Marc Marquez, ahead of Viñales and Crutchlow

Freddy Mercury would be 70 today - Asteroid named after the singer

Freddy Mercury 70th b-day: Asteroid named after him by Brian May